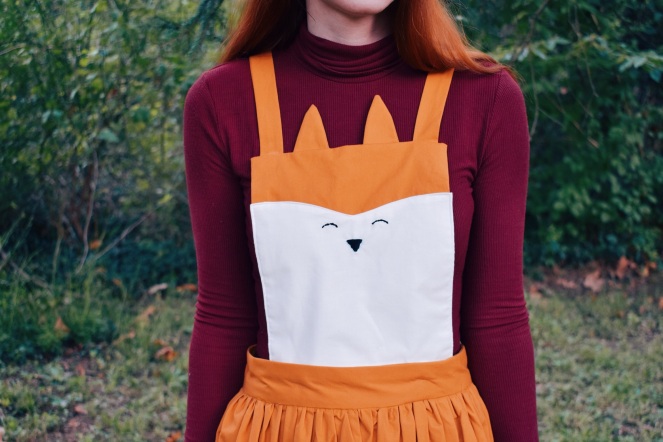 Happy October! The best month of the year. I’m so thrilled to share this make with you today. I really wanted this fox pinafore from ModCloth but I couldn’t justify spending that much money on something I wouldn’t wear a lot. As much as I love fox themed clothing, it’s a bit much to wear something like this frequently. I decided I would be able to make something like it pretty easily. I ordered some plain cotton from Joann’s and luckily the color match was pretty spot on. I made a simple self drafted gathered skirt with a zip in the back. To make the top, I sewed two long strips for straps  and some triangles as ears. I made two rectangles as the bib, and enclosed the ears and straps in the top seam. Once that was turned out, I stitched up the bottom edge. I made the white part by sewing together two rectangles again and curving the top edge. I stitched that on to the orange and embroidered some eyes and a nose on. I added buttonholes to the ends to the straps and bottom edge of the bib and added buttons into the waistband so I can remove it! This makes it much more wearable if I just want the skirt. I am thinking about making just two straps so I can wear it another way.  This turned out so much better than I thought and my total cost was only $25 compared to Modcloths $70! It was one of the rare times it was actually cheaper to make something than purchase it. 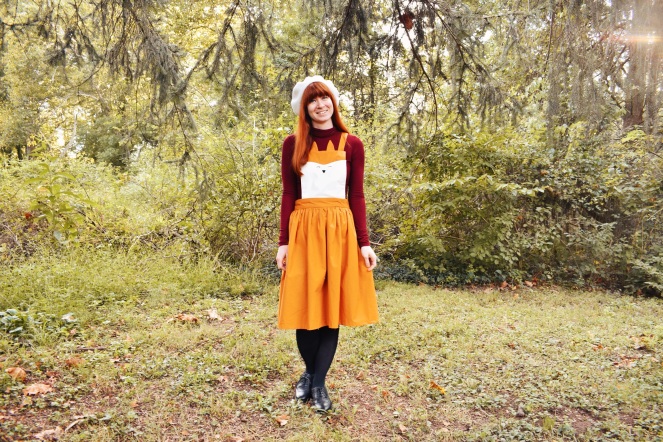 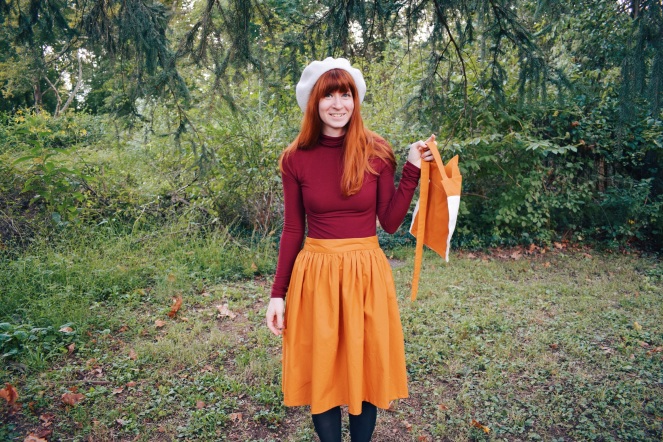 View all posts by Erin

Living a simple life in a small town of New Jersey with my sweet husband, Michael. I am working towards a self made wardrobe. I hope you’ll follow me on this creative journey!

“The brain appears to possess a special area which we might call poetic memory and which records everything that charms or touches us, that makes our lives beautiful.”
— The Unbearable Lightness of Being